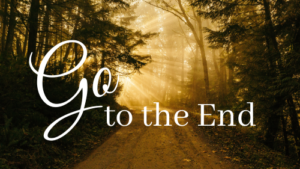 What do you do if you learn something that nobody else knows? Are you bursting to tell somebody else? Or, do you prefer to hold it close with a sense of having a secret?

Daniel was a person who was made privy to a lot of information. The parts he wrote down appear to be in a code that preachers have been trying to figure out ever sense. Other parts, he was told to keep secret and “seal up the book.”

So many sermons, closer to almost all that I’ve heard, on Daniel seem to be attempts to understand the future, or in our evangelical parlance, the “end times.” It’s all so interesting to learn secrets. So much so that I call some folk “prophecy chasers.” These folk will go to every prophecy conference they hear about, but fail to darken the doors of their local church each Sunday. They seem to be so interested in what’s going to happen in the future that they fail to live like Christ followers in the present.

The last chapter of Daniel is one that is ripe for looking to the future. It tells of future distress, of rising to everlasting life or everlasting contempt. Then there is the crptic “time, times, and half a time.”

I was reading this chapter just the other day and I saw something else. Hopefully something to encourage us today. And tomorrow.

Daniel has been given all of this information, much of which he’s been told to seal away. Then, least he spend too much time worrying about it, God speaks these wonderfully encouraging and enlightening words:

“But as for you, go your way to the end; then you will rest and rise for your allotted portion at the end of the age.” (Daniel 12:13 NASB)

I’m reminded of Jesus last words with Peter in the book of John. Jesus has just told him three times to feed His sheep. Then Peter looks over at “the disciple whom Jesus loved” and asks, “What about Him?” Jesus replied, “You follow me.”

So, are we chasing the future with little thought for today? Perhaps it’s with worry or dread. Sometimes just the sense of the great unknown. For some, it’s with hope for future prospects – jobs, marriage, children, grandchildren, promotions, even retirement. It seems we all tend to have our eyes on the future in some form or fashion.

However, our task is to simply follow the Lord. We are to “go our way” in the path that He has laid out for us. When we place today, as well as tomorrow, in His hands then we will come to our rest and our resurrection.

So, let’s go to our end following in His footsteps.

1 Trials dark on ev’ry hand, and we cannot understand
All the ways that God would lead us to that blessed Promised Land;
But He’ll guide us with His eye, and we’ll follow till we die;
We will understand it better by and by.

Chorus:
By and by, when the morning comes,
When the saints of God are gathered home,
We will tell the story how we’ve overcome;
We will understand it better by and by.

2 Oft our cherished plans have failed, disappointments have prevailed,
And we’ve wandered in the darkness, heavyhearted and alone;
But we’re trusting in the Lord, and according to His Word,
We will understand it better by and by. [Chorus]

3 Temptations, hidden snares often take us unawares,
And our hearts are made to bleed for some thoughtless word or deed,
And we wonder why the test when we try to do our best,
But we’ll understand it better by and by. [Chorus]