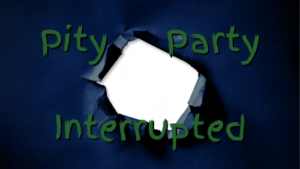 We’ve all been there. Life is not going as we planned or wished or hoped, and we start our own personal pity party. Of course, someone comes along and tries to cheer us up, but we don’t want any part of it. We find consolation or relief, maybe satisfaction, in feeling ourselves the victim of some clear quirk of fate.

There was once a man who was hated by almost everyone around, even the king of the country. It seems he never had anything good to say. It was mostly doom and gloom. They tried to kill him, even dropped him down in a pit for a while. He’s often called the “weeping prophet” and if anyone deserved to be in a pity party it had to be Jeremiah.

One day, not so long ago, I was reading in the Bible book of Jeremiah, of course it’s named after this prophet, and I ran across one of his “parties.”

“Lord, you talked me into it and I let you get me into this mess.”

“Everybody’s laughing at me.”

“Whenever I speak, it’s all violence and destruction, and all I get is taunting and derision.”

“Even if I try to forget about You and the message, it starts burning in my bones so that I can’t keep it in.”

“I hear the whispers denouncing me. Even my trusted friends watch for me to fall so they can get the best of me.”

“I curse the man who told my dad that he had a son because he didn’t kill me instead.

“I wish I had been born dead.”

“Why, oh why, did I enter this world because my whole life has been spent in shame?”

(If you don’t believe me, you can read it in Jeremiah 20:7-18. I did paraphrase, but you definitely get the message.)

“Sing to the LORD, praise the LORD!
For He has saved the soul of the needy one
From the hand of evildoers.” (Jeremiah 20:13 NASB)

Wow! That is a huge interruption to Jeremiah’s pity party. It didn’t stop him from continuing, but in the midst of all of his bellyaching, he was surprised by God.

Reminds me a little bit of another incident where some guys were hidden away in a room. Their leader had just died a horrible death. What were they to do? Doom and gloom was settling in and taking over.

There was Jesus. In the room with them. Surprise, surprise, God showed up again. He was alive!

“Sing to the LORD, praise the LORD!”

So, life doesn’t take us the direction we had wanted and we’re ready to cave in, settle back and start our party. Guess what? We really were in despair. Our life of sin was taking us down a road of destruction, when BOOM! God showed up. He died that we might have life and rose to give us hope.

Yes, we’ll still have our pity parties. We’ll still bemoan the things that are happening to us. But, in the middle of it:

“Sing to the LORD,
praise the LORD!
For He has saved the soul of the needy one
From the hand of evildoers.”