In our political climate at this time, we read or hear about people on all sides of the aisle claiming God’s agenda. Members of both sides claim religious affiliations. They pray and they read the scriptures. It’s as if we all want to say that God is “on our side.”

It’s probably not so crazy since we also want to claim that God is on our side for wars and ball games.

However, if anybody in history could claim that God was on their side, it would be the ancient people of Israel. God had sent Moses to lead them from Egyptian bondage. He had led them through the wilderness in times of obedience and disobedience. They were His people.

Yet, I find a very interesting story in Joshua 5.

The people have crossed over the Jordan River into the promised land and they are preparing for their assault (as unusual as it would be) on Jericho.

It appears that Joshua was doing some personal surveillance of Jericho when he looks up to see a man with a drawn sword in his hand. So, Joshua steps toward him and asks a logical question, “Are you for us or for them?” Then, comes the surprising answer, “No.” 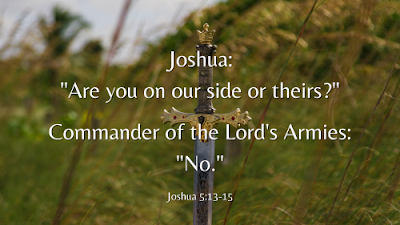 Actually, it’s a little longer than that: “No; rather I indeed come now as captain of the host of the Lord.” (NASB)

Here we have the leader of the Lord’s armies telling Joshua, “No, I’m not on your side.” Then, Joshua falls down before him and asks, “What has my lord to say to his servant?” (NASB)

To me, this appears to be a pre-incarnate appearance of our Lord, as he says to Joshua, “Remove your sandals from your feet, for the place where you are standing is holy.” Remember Moses and the burning bush? Then Joshua did as he was commanded.

In our lives it is imperative that we remember that God is not “on our side.” Not in ball games, not in politics, not in war, not in church, not in anything. What is imperative is that we bow before our King, ask, “What do You want me to do?” and then act in obedience to His command.

There is an old hymn that I grew up with entitled, “Who Is On the Lord’s Side?” by the great hymn writer, Francis R. Havergal who also wrote, “Take My Life, and Let It Be Consecrated.” Now, the lyrics don’t necessarily speak to our theme here, but the title can be helpful.

It’s important that you and I are on God’s side and that’s very, very different than Him being on our side.

PPS: You can sign up for my email newsletter by clicking here.

PPPS: If you would like to support my work, you can do so by clicking here.