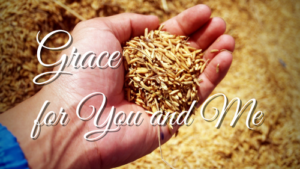 I suppose my sub-title is “The Redemption of Judah.”

Usually when we hear the story, it’s told as two separate stories, but I want to share with you the grace that can be found in putting the two together.

The first story is how Joseph, the young son of Jacob, is looking for his brothers. They don’t like him so they consider killing him when he shows up. Instead, they decide to sell him to a caravan that’s passing by.

The second story is after Joseph has risen to second-in-command in Egypt and begun to save them and neighboring countries from the famine. His brothers show up to purchase food and don’t recognize him. We are treated to a bit of dramatic action played out as he deals with these brothers who sold him into slavery, a broad refence to the first story, before he reveals himself to them.

Now, let’s get back to Judah…

We find the first story in Genesis chapter 37. It’s here that we realize that Judah is a main player in the plot to get rid of this hated little brother. In verses 26-27, “And Judah said to his brothers, ‘What profit is it for us to kill our brother and cover up his blood? Come, and let’s sell him to the Ishmaelites and not lay our hands on him, for he is our brother, our own flesh.’ And his brothers listened to him.” (NASB)

I wonder if Joseph, who is at this point down in a pit, hears his brother Judah say these words. How dreadful to realize that your brothers were thinking of killing you, but still devastating to hear that they were willing to sell you. You would be carried far from your family. You would never see your father, or your baby brother, again. What was the impact on Joseph if he heard his own brother, Judah, say these things?

The second story plays out in chapters 42, 43, and 44 of Genesis. The drama unfolds through a first trip to Egypt for food which includes the incarceration of brother Simeon, and a second trip in which they are compelled to bring little brother Benjamin. Interestingly, Jacob only allows Benjamin to accompany the brothers when Judah steps up and accepts full responsibility for the safety and welfare of his younger brother.

The action continues until Genesis 43:18 and following, where we read these interesting words, “Then Judah approached [Joseph] and said, ‘Oh my lord,  may your servant please speak a word in my lord’s ear, and do not be angry with your servant…For your servant accepted responsibility for the boy from my father, saying, “If I do not bring him back to you, then my father can let me take the blame forever.” So now, please let your servant remain as a slave to my lord instead of the boy…For  how shall I go up to my father’s house if the boy is not with me?'” (NASB)

It is at this point that Joseph can no longer control himself and reveals his identity to his brothers.

I can only imagine that as Joseph hears these words come from the lips of Judah, his mind goes back to those earlier words that his brother uttered. In that moment, he recognizes that before him stands a changed man. Instead of one who would kill or sell his own flesh and blood, now Judah is willing to lay down his own life, his own dreams, his own family, to take responsibility for this second younger brother.

What work of grace had God done in his life to bring Judah to this complete change of heart and being?

1. Marvelous grace of our loving Lord,
Grace that exceeds our sin and our guilt,
Yonder on Calvary’s mount out-poured,
There where the blood of the Lamb was spilt.

2. Dark is the stain that we cannot hide,
What can avail to wash it away?
Look! there is flowing a crimson tide;
Whiter than snow you may be today.

3. Marvelous, infinite, matchless grace,
Freely bestowed on all who believe;
All who are longing to see His face,
Will you this moment His grace receive?

(“Grace Greater than Our Sin” by Julia H. Johnston)

What have we done? Where have we failed? What is the dark stain of sin in our lives? It’s so marvelous that God through the death of His Son, Jesus, offers to us pardon from our sin, whatever it may be. We only need to accept this great gift of grace. Then the story of Judah’s redemption becomes our story of redemption.

By the way, Jesus was a descendant of Judah. How amazing is God’s grace.

Blessed be the name of the Lord!!

Be encouraged and inspired on a regular basis. Click here to sign up for my email newsletter.